South Point Dental Gives Back With The Cambodian Children’s Fund 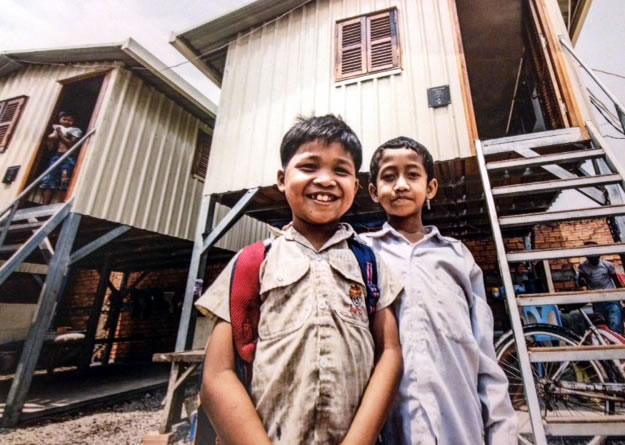 South Point Dental Gives Back With The Cambodian Children’s Fund

South Point Dental believes in giving back to the community through charities and groups in Surrey, and recently became involved in an international project through the Cambodian Children’s Fund. The Fund was created by Hollywood movie mogul Scott Neeson, who visited Cambodia and was compelled to take action after witnessing the human tragedy on display in a garbage dump near Steung Meanchey. Today the Cambodian Children’s Fund provides support for over 2000 children and families in need.

Recently, Dr. Wong took this opportunity to make a positive impact on the lives of impoverished families in Cambodia.

Neeson’s Fund partnered with Vancouver-based World Housing to set up a new project, providing homes for some of those 2000 children in Cambodia. In the dump, young children and parents rummage through trash to try and make a living. Debt remains such a problem there that parents often sell their children into prostitution and children as young as new-borns are abandoned routinely. Neeson set up the Fund to change things, and has made an immeasurable difference so far, but there is so much more to do. With this new project, a safe and secure World Housing home has been gifted to a deserving family on behalf of South Point Dental.

Read more about Neeson’s journey and recent initiative in the Vancouver Sun!

A Home is Everything, and to a family earning its living recycling garbage dump materials, a World Housing home is much more than a dwelling. It’s a place to call their own. A place that restores lost pride and dignity. A place of sanctuary, security and comfort. World Housing homes are the foundation upon which fractured families can rebuild their lives and create bright new futures. It offers a chance to put their children through school, rather than forcing them to work; and also offers other support through the Cambodian Children’s Fund provides food, clothes and medicine.

The “South Point House” was presented to Kol Sina’s family in the summer 2014. The home is worth $2500 and has electricity to allow for modern amenities. In order for Sina’s family to get a home in the program, they were required to go through a screening process which included an agreement that they keep their children in school, not working at the dump, and that they remain drug free without a record of domestic abuse. The results speak for themselves, with the house providing shelter and light in the darkness, and just maybe, a chance to change things in Cambodia, one child at a time.

South Point Dental and Dr. Ed Wong were inspired by Scott Neeson’s story, which will no doubt be a movie on its own some day. He sold his house, cars and boat and moved to Cambodia to focus on the fund and oversee the charity directly. Recently South Point joined Neeson when he visited Vancouver to thank owners of Vancouver House, a new luxury high rise, where every condo sold also means a new home for a family in Steung Meanchey. You can learn more about the Cambodian Children’s Fund and you can also watch the Ted Talk below for more information about how you too can sponsor a home for a family in need.

We Are Open! Covid Safety.

We want you to know that we are open and observing Covid-19 safety protocols. Patient health and safety is our #1 priority, and we use personal protective equipment for all our staff to serve you in a safe and healthy environment.

If you have missed or had to cancel your dental hygiene appointment or had to delay any treatment plans due to COVID-19, now is a good time to book your next appointment.

Please call or email us if you require an appointment.